Is it OK that "The Scream" is a brand?

Dealing with an iconic image like "The Scream," Chrysler Museum of Art had an interesting line to walk in its showing of Edvard Munch and the Cycle of Life: Prints from the National Gallery of Art. On one hand, you have the commercialized version of this image that has been reduced to the level of a SnapChat filter. On the other, you have a powerful testament to human suffering, for which this collection of works gives ample context. One of those is a basis for a sincere conversation about mental health.

When I first arrived to see the show, I stopped in the gift shop to get something to write with. Immediately confronting visitors was a table of souvenirs of "The Scream," one of the most recognizable images in all of art. There were figurines, key chains, toys, etc., complete with sound effects, all featuring the familiar horrified character, holding his head in his hands, mouth agape in agony. Just to be clear, "The Scream" is an account by Munch of one of the all too familiar panic attacks that he suffered due to anxiety and addiction issues. This seemed to me to be an odd thing make into souvenirs, like you would a monument or theme park. Even weirder is the fact that someone might buy such a thing. But I purchased a museum logo pen and moved on.

There is so much to talk about in the twisted and haunting prints that make up this incredible show, but for my purpose here, I will confine my comments to "The Scream." I sat for a while with this image, reading Munch's own description of the immortalized moment as it was stenciled on the museum wall -

"I was out walking with two friends - the sun began to set - suddenly the sky turned blood red - I paused, feeling exhausted, and leaned on the fence - there was blood, and tongues of fire above the blue-black fjord and the city - my friends walked on, and I stood there trembling with anxiety, and I sensed an endless scream passing through nature."

Heavy stuff, especially if you have anxiety or know what it is like to have a panic attack. The beautiful part of Munch's work was the honesty with which he approached tragedy and vulnerability. He treated human suffering as part of everyday life and brought out of the shadows, into the stark light of day. Overcoming stigma and having honest conversations around mental health issues is something we are still trying to do 100 years later, which the museum alluded to in one corner of the show. A few couches had been assembled, along with a coffee table displaying some pamphlets about local mental health resources. It seemed a bit sparse, given the backdrop, but the intention was there.

Exiting the show, I noticed a backdrop set up in the atrium for photos, complete with selfie camera and went over to see what it was about. Sure enough, when I sat in the seat provided, my face was framed on a screen in front of me, against the backdrop of "the Scream," occupying place of the main figure. There I was, looking at myself as the subject of the painting, the person having the panic attack. I honestly could not figure out if this was supposed to be a good time or a sobering moment of reflection. There are so many levels of irony here I don't even know where to begin. So I won't. I will simply ask some questions...

Do we benefit from being able to laugh at ourselves taking selfies with this painting, or are we trivializing the very topic we claim to be addressing?

Is this helping us to put ourselves in his shoes and have real discussions about mental health or are we using humor to deflect?

What does it mean when we make a keychain out of someone's anxiety attack?

Does the prevalence of this image in popular culture prove its timeless appeal or has it made us numb to its original impact?

Selfie vs. Emoji vs. Art

I think the danger here lies in equating "The Scream" with a selfie. Selfies are superficial in nature. They are the face we show when we want the world to think we are "living our best life." Munch is doing the exact opposite, revealing a dark moment of anguish, one that is apparently so universal that it made it onto our keyboard shortcuts for feelings, even if the emoji version more closely resembles the cartoonish kid in Home Alone than the waking nightmare that inspired it. While "The Scream" should not be confused with a selfie or an emoji, one could argue that Munch was using painting in a way that may people use the internet today - to share his darkest moments in a public way. Still, I think a more fitting interactive element to accompany this exhibition could have been to create a way for people to share their own descriptions of experiences with anxiety. Anything that focused on the terror in this image would have been more in line with facilitating a mental health conversation and invited us to look beyond the caricature that has taken on a life of its own in popular culture. But perhaps we have to embrace the reality of the souvenirs and keychains as well. I'm just not sure we can have it both ways. It's either a toy or an emotional breakdown, for the same reason there's no "Depression Barbie."

As I sat there trying to figure out how to work the selfie camera, people were walking by and some had stopped to watch. With the device now counting down, what was I supposed to do - make the face of "the Scream" with all these people watching? If I do it, there will be a record of me actually making a mockery of this painting. If I don't, I am missing out on this bizarre social experiment. Well, here goes... 3...2...1... 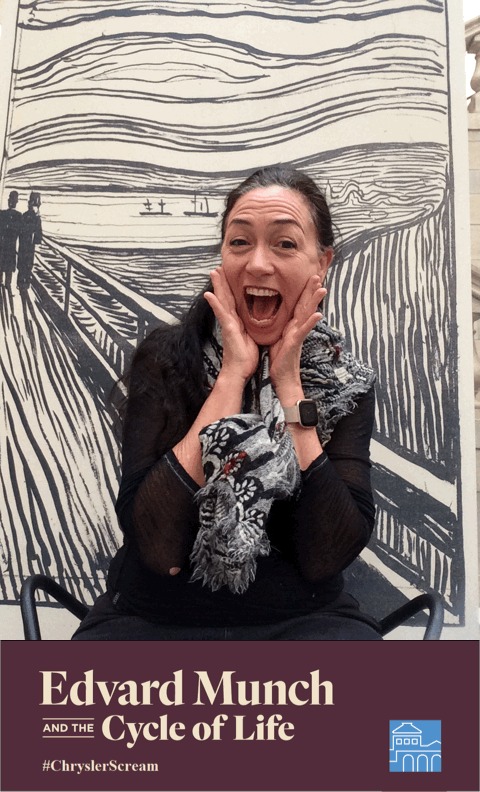